The Best Burger in Glasgow Pt I

Lucky 7 Canteen: Bigger than your bite.

I’ve wondered about Glasgow’s best burger – where I can find it, how it tastes, looks, feels, whether it towers magnificently over the chips spread aside it like a moreish monolith of bread and beef – for a long time. The Quest may not have taken me far and wide – Glasgow’s not that big – but it has led me through the doorways of a good many gastropubs, restaurants, brasseries, bars, cafes and diners, many purporting to serve the most mouth-watering burger in the city. They can’t all be right. Where’s the best burger at?

That’s a question which can’t be answered right now…at least not comprehensively. Thus far in The Quest, I’ve only visited half of the burger joints on the shortlist; the undisputed winner will be crowned in Part II. Unlike The McWorkout, The Quest to source Glasgow’s finest burger has been an exercise in procrastination. In the short term, hit up the shortlist provided below, if you haven’t already, and let me know which slab of meat is your favourite. Got a recommendation I can check out ahead of Part II? Stick that in the comments box while you’re at it.

In the past few months I’ve chowed down at Buddy’s, Cocktail & Burger, Nice’N’Sleazy, Ad Lib, Bread Meats Bread, Lucky 7 Canteen, Burger Meats Bun, Brooklyn Cafe, Jacker de Viande, Meat Bar and Church on the Hill. I’ve joined the ranks of those intolerable cretins who whip out smartphones and grab a snap of their food before enjoying a first bite, albeit solely for the purposes of this blog in my case. I’m no food writer, but the pics  should give you a pretty decent idea of what to expect. Let’s do this.

Damn, this burger is good. Not because the beef itself smacks of flavour, which it does, but because the whole brawny package comes together so well. The bacon is crisp yet tender, the bun perfectly proportioned to contain the generous layering of cheese, heap of lettuce/gherkin and tomato, and formidable burger atop its base. Ron McKenna at the Herald reckons Jacker de Viande is the city’s best burger; I was of the same mindset until I sampled Bread Meats Bread, but it’s right up there for sure.

Meat Bar’s offering is the most expensive on the list (£11, chips not included). It’s also the sexiest to look at. I mean, just gaze at the thing: it’s a work of art! The Splendor burger consists of a sizeable beef patty, braised shin of beef, smoked mushroom caviar, taleggio cheese and roasted garlic aioli. Frankly, I loved it. That taleggio cheese is on point, the rich mushroom caviar racing down the burger alongside it, and even the bread, topped with toasted seeds, had flavour. Difficult to top, but the messy brilliance of Jacker and Bread Meats Bread pips it, for me.

The main thing that jumps out about the burgers from this establishment is that they’re messy as fuck – one bite and a rivulet of chipotle oozes into the greaseproof paper, soon forming a shallow puddle. There also seemed to be one too many ingredients; in my BBQ Bill, which was the daily special, I had pulled pork, toma raschera, jalapenos, buffalo slaw, chipotle mayo, lettuce, tomato and pickle all competing for attention. It was, nonetheless, very tasty, with a perfect bun. I felt Burger Meats Bun‘s beef patty was a little thin, so despite the number of ingredients, I decimated the burger itself in record time.

The cavernous Cocktail and Burger, on Sauchiehall Street, is well worth a visit. Not only do they have unique ingredients to toss on your burger – Kopparberg onions, to name but one – but they do a great line in hotdogs too. I went for the St Petersburger, a 6oz Aberdeen Angus burger topped with ten-hour hickory smoked pastrami, grilled Emmenthal and Russian dressing. The result was impressive, from the tidy brioche bun to the flavoursome burger sauce and tender strips of pastrami. Highly recommended. Head along on a Wednesday, when burgers are 2-4-1.

Brooklyn Cafe, a short walk from Buddy’s in Glasgow’s Southside, is rarely mentioned when a debate about Glasgow’s best burger strikes up, but its delicious cheese and bacon burger, topped with grilled Scottish cheddar and two rashers of smoked back bacon, is every bit as satisfying as the Western Burger. In truth, I enjoyed it more – the beef itself had a richer flavour, the cheese didn’t come in a slice so much as a wedge, and the bun had enough give to let you compress the whole package down for no-fuss eating. As a sidenote, the cajun fries are the best I’ve come across in the city.

At one time, the Western Burger from Buddy’s was the standard bearer, Glasgow’s biggest, baddest and best burger. What happened? God knows, but it’s no longer atop the pile. Still, it’s a solid effort: a sloppy, messy burger, topped with melted cheese, bbq sauce and a greasy onion ring, perfect for remedying a troublesome hangover, particularly when twinned with some crispy cajun-seasoned fries. If modifying the Western Burger, I’d make the burger patty a little thicker, but all told, it’s still one of the city’s finest.

I wasn’t blown away by my burger at Lucky 7, but that’s not to say it was bad; it simply didn’t have me smacking my lips and anointing this Bath Street burger bar as the Mount Sinai of my Quest. I opted for the homemade beef burger, with Scottish cheddar and a mushroom as optional extras (77p each). The meat was well seasoned, if a little too well-done for my taste, and I was glad that the bun was of the classic, crunchy seeded variety, with plenty of melted cheese. Disappointingly, my portion of chips was a bit on the stingy side.

CotH gets a berth on the list mainly because it’s my local. This gastropub also does decent burgers though, accompanied by brilliant, thick-cut chips overflowing from an old-fashioned, fish and chip shop-style wire basket. The burgers are no frills, but you gotta love the so-crispy-it’s-burned-along-the-edges seeded bun and well-fired patty. Their succulent chicken breast burgers are also first-rate.

That’s how the league table stands thus far. Since I was too busy eating their burgers to get a pic – and too drunk/hungover to accurately assign said food a normalised rating in hundredths – the contenders from Ad Lib and Nice’N’Sleazy’s will feature in Part II. Black Sheep, Butchershop Bar & Grill, Lebowskis, Inn Deep, The Pacific, Smoak and Slouch are next on the hitlist. I’ll find Glasgow’s best burger if it kills me…or adds a few inches to my waistline. Stay tuned.

Meat Bar: You want some? 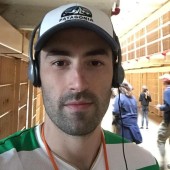 The 10 Greatest Moments of Your Life

The Best Smartphone Apps of 2014